Today I had a challenge or maybe opportunity 😊 to set up marketing automation process in Click Dimensions Campaign Automation for the first time. This is reason I want to share this experience with you.

In the beginning it looked pretty easy, and I just needed to create few email templates (it depends how much templates we need), after that I have to create marketing list and to create new campaign automation which look pretty easy because it works on the first sight as Microsoft Flow, just with less actions and triggers.

As I said, looked quite easy. When you enter the campaign automation builder, it looks like you will finish just in a few minutes, and you will do it, just if you know some “secret weapons” 😊.

Of course, every time when you are working with some kind of workflows, you must start with triggers, and to continue with actions and triggers in combination as much as you need. But in my case, I had to start with email trigger and as much as I wanted to finish it, it always made some issues. After a few attempts I realized that my email triggers have a problem in that it doesn’t know which email to use. But if you want to begin with saying this mail you will use is not possible to use because this is an action, and of course you can’t start with an action… 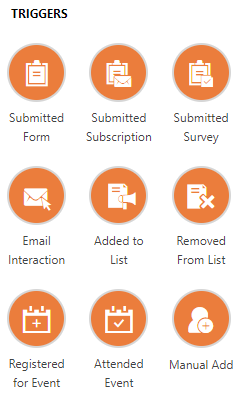 After a lot of thinking and trying to get over this problem, because there are not a lot of triggers I realized that I must begin with Manual Entry (which is note normal to use, when you have a few hundreds or thousands emails to enter in list), and that was a problem. But as I said in the beginning of this article, it is not hard to work in Click Dimensions campaign automation, but you have to know some things, and I realized that the best way was to start with marketing list triggers entry and it finally started working.

Then it came to the next problem, but this time on the end, because we must close the triggers. Just to be clear, in Click Dimensions Campaign Automation, at the end of builder, you must put the action, so again it was problem to realize which action would be normal to use; when you compare it with Microsoft Flow, it can be little bit confused, because Flow doesn’t require it. If I use email action again, it will be in some circle which could never be closed, and further I didn’t want to delete someone from my marketing list because they didn’t answer to this campaign, because they will maybe respond at the next, and my trouble continues. But I realized that there is no other way to close it except of using ‘remove’ from the list action. Again, I had to get over new problem to finish this campaign automation, and with little thinking I remembered to create the clone of my marketing list and to use it from beginning of my campaign automation process, and in that way, I will keep my marketing list on original one.

These problems took me some time, but after resolving all of them, I found out that using of Click Dimensions Campaign Automation process if quite easy, but you need to try few times before it works, and after some time of using it often you will really create every Campaign Automation in few minutes.

This site uses Akismet to reduce spam. Learn how your comment data is processed.